Pakistan is the world’s 10th largest producer of rice, as in the year of 2019, Pakistan produced about a 7.5 million ton of rice. Rice is an important Kharif crop and amongst the staple food of many Pakistani folks. Rice is grown in fertile lands of Punjab, followed by Sindh and remaining areas. It is the dominant cash crop of Pakistan and a major source of foreign exchange earnings. Dubai, Saudi Arabia, Kuwait, Turkey, Sri Lanka and Iran are the main importers of rice.

According to an estimate, the rice exporters in Pakistan produces 6 million tones rice annually and the 4 million rice is exported after fulfilling the national demand of 2 million tones rice. The pricing of rice should be kept under check by governmental institutions. Keeping the pricing close to the regional rivals is necessary so, the exporters must have their equal share in world market.

While Pakistan stands at a number five in rice exporting countries and is recognizable for its production and export of high quality and aromatic Basmati rice around the globe. Rice exporters in Pakistan constitutes about 8% of total world rice trade. The future of a prosperous economy lies in the efforts of rice exporters to generate as much foreign exchange from their produce.

There is a diverse variety of rice grown in Pakistan but the leading three types of rice, used for the native utilization and export to other countries are;

1112 Basmati rice has long grain and a seamless quality with cost effective price.

The Parboiled Sella Rice also known as Basmati Rice White Sella, is one of the most in-demand varieties in the world.

PK-386 Long-grain rice is non-basmati rice known for its Basmati like cooking and fragrance mostly exported to Middle East and African countries as they are much cheaper than usual Basmati.

THE REAP (Rice Exporters Association of Pakistan) played a major role in setting rice standards in Pakistan with 1900 members in the region. In the year of 1988-1999 REAP members enjoyed an export of 2 million tons of rice. Furthermore, in 1992, countries from Persian Gulf Region i.e. Kuwait, Oman, Qatar, UAE, Saudi Arabia and Bahrain were invited by REAP to collect Government Buyers of rice from these regions. As a result, 36,000 tons of rice was exported from the private sector. 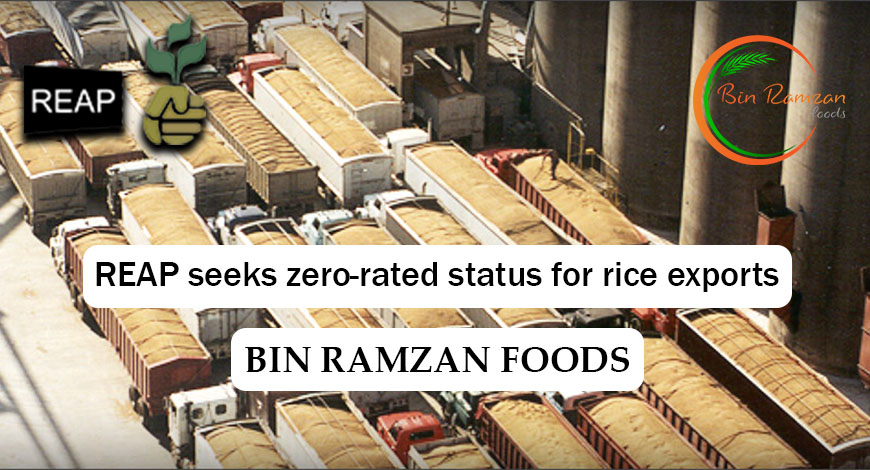